Catching Up With Chris Gratton 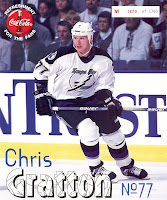 In June 1993, the Tampa Bay Lightning selected Chris Gratton, an 18-year-old Canadian from Brantford, Ontario, with the third overall in the first round of the NHL Entry Draft. Gratton played in all 84 of Tampa Bay’s games as a rookie, during which time he was the league’s youngest player. On a team full of veterans, the rookie registered 13 goals and 29 assists while learning the ropes on and off the ice. The former Lightning captain is currently in his third stint with , where he has played 480 of his 1,084 career games. The veteran center recently sat down to reflect on his career journey and to talk about another young player with high expectations, Lightning rookie Steven Stamkos.

Q. How fast have the last 15 years gone by for you?

A. They’ve flown by. Each year you’re fortunate to play in the NHL, and they just go by faster and faster. As you get a little older you try to slow it down, really take it all in, and enjoy it as much as you can. I’ve been very fortunate that I’ve been in the league a while now, and I’m very thankful to have the opportunity to still be here.

Q. What do you remember about your first career NHL game?

A. I think how nervous I was. It’s very emotional. You spend 18 years of your life working towards a goal. Once you get past the nerves and into the game, it’s an exciting experience. It’s something you’ll always remember, like the speed of the game and the size of the players, how strong they are. It was a big change from junior hockey.

Q. Another huge change from juniors must have been that first home game at the ThunderDome in front of a crowd of over 27,000. What was that like for you?

A. It was unbelievable. The dome was a special place to play. We had great fans and the building was always energetic. I think the biggest memory I’ll have, though, is our first playoff game in there against the Flyers. I can’t forget just how loud it was and the energy of the fans. It’s a great baseball stadium now, but at the time it was an unbelievable place to play hockey and we had a lot of fun there.

Q. Who were some of your mentors that showed you the ropes as a rookie?

A. A couple of guys who I’m still friends with today, Rob Zamuner and Pat Jablonski. I lived with Rob my first year, and he really helped me out since he’d been in the game a while. So to come into the league at the age of 18, it’s just a different world. Having someone to help you along and teach you the ins and outs of the NHL is huge. I feel fortunate to have had those two guys around and I learned a lot from both of them.

Q. What was the biggest challenge you faced as an 18-year-old living the NHL lifestyle?

A. Paying your own bills is definitely a reality check. When you’re a teenager playing junior hockey, you have to worry about two things: school and hockey. When you come into the NHL, you’re on your own. In junior, you’re living with a family. In the NHL, you’re on your own or living with a teammate. You learn so much, from small things to paying bills to getting a car. The importance of being on time is something I learned early on in my career. Those little things are big things in the overall picture.

Q. Do you see yourself in Steven Stamkos, who is beginning his career this season like you did as an 18-year-old, and is there any advice you can impart on him from on your own experience?

A. I think he’s more mature (laughs). He’s 18, but he’s got a great head on his shoulders. Obviously he’s got a great family behind him. They’re very supportive and helpful. Right off the bat that’s a huge first step. We’ve got some older veteran leaders in here, guys who will help him at any chance. He’s living around a lot of the guys and everyone’s going to be looking out for him. I don’t think he’ll have any problems adjusting. If he has any problems or any questions, he has 22 guys in here that are going to help him and that makes the transition a lot easier.

A. There are two things. Your first NHL game is something you’re always going to remember, but then for me it has to be my first face-off against Wayne Gretzky. is from my hometown in and I’d followed him through his whole career. I really looked up to him. That draw against him is something I’m always going to remember, particularly how nervous it made me. The knees were shaking just a bit (laughs). He’s a world-class player and a world-class person, so it was nice to get a chance to play against him.

Q. This is your third stint here with the Lightning. Through all of your travels, has this always felt like home because it is where you got your start?

A. Absolutely. You’re always fond of the team that drafted you and given you a chance to play in the NHL. has always been a special place. I’ve always loved it here and the people have been great fans. I’m very thankful that I had the chance to come back here for the third time. This will be my last stop, so I’m going to try and make the most of it, and really enjoy the area because it’s a great place to play hockey.

Posted by Travis Puterbaugh at 4:47 PM