Australian tennis star Roy Emerson had already cemented his status as one of the top players in the world when in February 1963 he arrived in Tampa with many of the world’s best players for the 36th Dixie International Tennis Championships. Ranked No. 2 in the world behind only the legendary Rod Laver, Emerson highlighted a field that tournament chairman E.C. Smith called “by far the greatest in the history of the tournament. None has been able to compare any others with this one.”

Defending tournament champion Manuel Santana of Spain, one of the top clay court players in the world and the 1961 French Open champion, figured to once again have a decided advantage on the Davis Islands clay. Bob Hewitt and Fred Stolle, both Australian and both future Hall of Famers, added even more depth to the field.

Rain and brisk gusts of wind on the first day of the tournament proved symbolic for what turned out to be a tumultuous and unpredictable week of tennis. Thomas Koch, a 17-year-old Brazilian, netted the tournament’s first upset by disposing of fourth-seeded Hewitt, 6-2, 1-6, 6-2, in the opening round. Just a few hours later, Koch defeated University of Miami star Rod Mandelstamm 6-3, 8-6 to reach the quarterfinals.

Armi Neely, Florida’s third-ranked junior player but only a sophomore at Plant High School, had the misfortune of drawing Santana in the first round and took a 6-2, 6-2 defeat.

The quarterfinals produced by far the most surprising upset of the entire tournament, when Fred Stolle earned his first career victory over fellow Aussie Roy Emerson, in a 7-9, 6-1, 7-5 decision. Using a devastating backhand passing shot, Stolle kept Emerson, a natural serve-and-volley player, off balance and unable to make himself comfortable at the net. In a back-and-forth third set, it looked as if Emerson might pull away when he took a 3-2 lead. Stolle quickly regained the upper hand, however, and never looked back on his way to the surprise victory.

Gracious in defeat, Emerson refused to blame the loss on a bout of the flu that plagued him coming into the tournament. “It was just a matter of one point here and there that made the difference,” he said. “Fred just played very well.”

Meanwhile, on the women’s side, Sandy Warshaw lost a professional match for the first time in more than two and a half years. Warshaw, who first won the Dixie Tournament as a 17-year-old, dropped her match in straight sets to Elizabeth Starkie of England, 6-2, 6-2.

Physical ailments had derailed Warshaw’s promising junior career in 1961. Following the Dixie match, she seemed resigned to the fact that she might never return to championship form. Warshaw laughed at the thought and said, "I'm a has-been and only going on 20."

Hardly a has-been, Darlene Hard obliterated Judy Alvarez 6-0, 6-0, to earn a berth in the finals. Alvarez, the 10th-ranked woman in the U.S., managed to win only 23 points throughout the short two-set match. In the meantime, a dream finals matchup between Hard and Maria Bueno never had a chance to materialize because of Australia's Lesley Turner. The fifth seed in the women's draw upset top-seeded Bueno, 6-2, 5-7, 8-6. Bueno failed to convert a match point at 6-5 in the third set, opening the door for Turner to pull off the upset. After the match, a visibly upset Bueno lamented, "I thought I played well, but (Turner) played better."

On the men's side, nobody was playing better than Spaniard Manuel Santana as he entered his semifinal against Thomas Koch of Brazil. Manuel captured the first set in just 15 minutes, 6-1, and seemed on his way to an easy victory. But the rest of the match turned into a nearly three-hour slugfest that delighted those in attendance. Koch rallied to win the second set 6-4, evening the match at one set apiece. The third set went back and forth, with Koch breaking Santana's serve to even it up at 3-3. Santana then took control and captured the set 6-4. The fourth and final set featured Santana rallying from a 3-0 deficit en route to a 10-8 victory. Santana admitted the easy first set gave him a false sense of security. "I thought it would be easy. I lost concentration, then he started playing very well. He's very much improved since I played him last year," he said.

Inclement weather forced the men's and women's finals indoors to the comforts of the University of Tampa gymnasium. This placed Santana, a clay court specialist, in a precarious position. To win the championship, he had to play the final match on a hardcourt surface. His opponent, Fred Stolle, clearly favored the indoor surface. Already full of momentum from knocking off Emerson and then the third-seeded Marty Mulligan, Stolle still had his hands full with Santana. On the strength of his serve, Santana won the first set, 6-3. The second set, however, turned into the longest in the history of the Dixie tournament. The two-hour-plus set concluded with Santana on top, 21-19, to win the title.

Local tennis enthusiasts agreed at the tournament's conclusion that the quality of players made the 36th Dixie tournament one of the finest ever. Tournament chairman E.C. Smith said he "didn't know how it could have been any better. My only regret is that the rain forced us inside."

Even with that blemish, 45 years later the 1963 edition of the Dixie tournament -- which featured Grand Slam winners, Olympic medalists, Hall of Famers, and even a future mayor -- remains one of the most talent-laden and upset-filled tennis events ever held in the city of Tampa.
Posted by Travis Puterbaugh at 2:56 PM No comments: 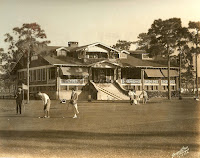 Golfers at the Palma Ceia Golf and Country Club getting in a few holes on January 9, 1924, in front of the bungalow-style clubhouse. This image comes from a promotional booklet put together by the Burgert Brothers to promote the benefits of living in . The image of people playing golf in January would surely appeal to anyone looking to relocate permanently to the area.
Posted by Travis Puterbaugh at 3:01 PM No comments:

One of the best-known brawls to happen in Tampa – a city known for its rich boxing history – occurred 60 years ago this week at Fort Homer Hesterly Armory. It was a doozy of a rematch featuring “Tampa Tommy” Gomez and Joe Matisi.

Gomez, one of the greatest boxers ever to come out of , sought to avenge a 1946 three-round knockout loss to Matisi. Bruised and battered, Gomez had temporarily retired following their first bout on Matisi’s home turf in

Gomez knew a thing or two about adversity, however, as a soldier in World War II. A veteran of the of the Bulge, the Hillsborough High graduate earned a Purple Heart for his heroic efforts during the war. He spent six months in a French hospital recovering from severe shrapnel and machine-gun bullet wounds.

True to form, Gomez pulled himself up off the mat and resumed his career with nine consecutive knockout wins leading up to the rematch with Matisi.

The eighth-ranked heavyweight in the world, Gomez entered the match with momentum on his side, while Matisi came to on a three-match losing streak. fight fans were certainly excited in the days leading up to the bout, as an overflow crowd jammed the Palmetto Beach Boys Club gymnasium two days before the match, just to watch Gomez conduct his final training sessions.

Promoter Lou Viscusi said it was the “biggest crowd I’ve ever seen at a workout since I started promoted boxing in .”

Advance ticket sales guaranteed a capacity crowd for the fight on the evening of Feb. 5, 1948. A record crowd of 7,500 fans packed into the Armory for what turned out to be a brutal slugfest.

Although neither fighter scored a knockdown during the fight, there was plenty of action, and a few low blows, to make things interesting.

In the fifth round, Matisi threw a low left punch below the waist that sent Gomez to his knees. Referee Eddie Coachman allowed Gomez a five-minute rest period to recover from the shot.

Perhaps doubting the credulity of Gomez’s pain, Matisi’s trainer, Ray Arcel, scoffed after the fight at the severity of the injury, saying modern “protectors” made it impossible to inflict serious injury with a low punch.

Gomez and Matisi traded low blows in the sixth before Gomez took full control of the match. The sixth round proved to be Gomez’s most dominant of the bout, as he battered Matisi with a barrage of left hooks, setting the stage for a seventh-round finale.

Both fighters at this point were the very definition of walking wounded. Gomez had injured his hands earlier in the fight and threw his punches with visible pain. For his part, Matisi could barely keep his mouthpiece in place because of a severe jaw injury. After Matisi absorbed a few more overhand rights, Arcel decided his boxer could take no more – he felt he had no choice but to throw in the towel for Matisi, earning a TKO for the hometown hero Gomez.

By the end of the fight, it was be difficult to discern between the victor and the vanquished. In severe pain, Gomez could barely make it to his dressing room on his own power after the match.
Both fighters were taken to following the fight. Gomez suffered a broken right hand and a sprained left. Matisi left with a broken nose and serious injuries to his stomach and jaw.

Two months elapsed before Gomez could return to ring action, but the repercussions for Matisi were much more significant. In his next match four months later, Matisi suffered a first-round knockout. He boxed professionally just two more times before retiring in 1949.

Gomez fought in eighteen more matches before calling it a career in 1950. Considered by many to be one of the greatest athletes in history, Gomez, who passed away in 2006, was ranked in 2003 by The Ring magazine as one of the top 100 punchers of all time. Nights like the one sixty years ago at the Armory will always remind fight fans why. 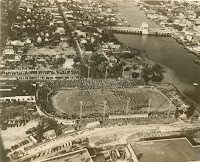 Located on the banks of the Hillsborough River, Phillips Field served as the home of University of Tampa’s football program for thirty years. The stadium was named after local businessman Isham Whitfield Phillips, whose family donated the land to the University of Tampa for construction of the field.

The stadium also served as the site for the annual Thanksgiving Day high school football game between Hillsborough and Plant, as well as the Cigar Bowl, a postseason college football game held from 1947-54. Phillips Field also hosted an American Football League exhibition game in August 1964 between the Buffalo Bills and New York Titans.

By the 1960s, however, most major college programs began refusing to travel to Tampa because of the tiny capacity of Phillips Field, which could accommodate barely more than 15,000. The construction of Tampa Stadium in 1967 marked the end of the road for the venerable old field. Today, the former site of Phillips Field is used as an athletic field on the campus of the Tampa Preparatory School.
Posted by Travis Puterbaugh at 3:03 PM 3 comments: