Catching Up With John Tucker 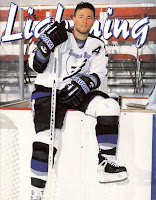 One of the original members of the Tampa Bay Lightning, John Tucker is remembered by Lightning fans for being both a consistent scorer and hard worker on the ice. Signed as a free agent by the club in the summer of 1992, Tucker came to after playing in during the 1991-92 campaign. Tucker spent the majority of his career, however, making his mark with the Buffalo Sabres. It was there that he won the Fred T. Hunt Memorial Trophy as the team’s rookie of the year during the 1984-85 season and befriended future Lightning captain Dave Andreychuk. A veteran of 12 NHL seasons, Tucker finished his four-year Lightning stint with 49 goals and 131 points. Today, he remains an active part of the community and maintains his ties to the organization he finished his NHL career with in 1996.

Q. John, what have you been up to since retiring from professional hockey?

A. I do alumni work for the Tampa Bay Lightning, as well as being heavily involved in youth hockey here in the area. I’m a coach and one of the vice presidents of the Tampa Bay Junior Lightning in . I’m also the North American general manager of A.S. Asiago, a professional hockey club in , and I do some consulting for the Japanese national team. It keeps me busy.

Q. In 1992, you signed as a free agent with the Tampa Bay Lightning. What was it like playing for an expansion team in a non-traditional market after playing for most of your career in ?

A. It was a real good experience. Most of the guys on our team were at points in their careers – not to put it too harshly – that they were not wanted by other teams. So you had 20 plus guys thrown into a city with great management in Phil Esposito who had a passion for the game. We were a bunch of muckers and grinders, and we made it work and had success for being a new team. We took a new organization and grew with it. Not a lot of guys can ever say that.

Q. You were a teammate of Dave Andreychuk’s in during the 1980s. What was it like for you to see him take over the leadership of the Lightning and transform them into a Stanley Cup winner?

A. I thought it was great, just great. There was a point when (then-General Manager) Rick Dudley said he wasn’t going to bring players in just to retire, but Dave saw some of the talented young players down here and came in on a mission. It turned out to be a great move.

As far as the leadership goes, we were groomed by some great veterans in . Gilbert Perrault, Larry Playfair, Lindy Ruff, Craig Ramsay, Mike Ramsey, they were our vets when we were rookies. We knew at 18 years old not to step on the team logo. That same tradition in is what Dave brought to . These are All-Stars and Hall of Famers, and to have those guys around, we were put in our place right away. They showed us how to become leaders and how to lead, what was expected of you.

Q. You spent most of your Lightning career playing on a line with Brian Bradley and Rob Zamuner. What did that do in terms of elevating your game?

A. You mean they played on a line with me! (laughs) When Brian came here, his career was kind of on a downward spiral because he had trouble fitting in with the Toronto Maple Leafs. Robbie Zamuner was a rookie, but he was one of Phil Esposito’s first picks when he was with the New York Rangers. We clicked, though, right from the first game. I did the passing, Rob did the checking and Brian scored. Then we started getting success and they brought in other guys like Petr Klima, Brian Bellows and Denis Savard, but Brian was a good guy to hook up with for sure.

Q. What was your most memorable game or moment as a member of the Lightning?

A. Really, just the whole first year. I was out of the NHL completely during the prior season when I went to play in , so I had the chance to come back. I knew what I had, and then it was taken away for a year. So the excitement was big for me. The first game certainly was a thrill. Then several years later, making the playoffs during the 1995-96 season and being a part of that team was a lot of fun.

Q. What did it feel like to skate onto the ThunderDome ice and play in front of over 27,000 fans on opening night against the Florida Panthers in 1993?

A. It was pretty crazy. It wasn’t the best hockey game ( lost to , 2-0), but it was a great experience. Skating out there and seeing all those fans, it kind of reminded me of the NBA Finals when the Pistons and Lakers played at the Silverdome. Just incredible.

Q. Even with all the success that the Lightning have had in recent times, the original team and its players still resonate with fans 15 years later. Why do you think that is so?

A. I think that the game has changed so much that the experience at the Fair Grounds and Expo Hall was something completely different. In order to get to your car, you had to walk out into the parking lot
with everyone else. Nowadays, you can’t see players after the games because they have their own private lot. As a team we were just way more accessible. Espo had us out in the community making appearances, doing everything from signing autographs to bagging groceries. We were trying to build a market. Fans identified with our group because of the accessibility.

Q. How is the game of hockey, both on and off the ice, different now from your playing days?

A. You can go on YouTube now, for example, and see highlights. It didn’t use to be like it is now with the access to information. Before, you just had books, magazines and newspapers. Today, there’s nothing you can’t find out about hockey thanks to the Internet. On the ice, the speed of game is unreal. You look at old footage of the 1980s, it’s just embarrassing to watch. It sure must be fun to play now without all the hooking and holding!

Posted by Travis Puterbaugh at 5:17 PM